Last Friday I competed in the third and final round of the Super League here in London, which was a local bouldering competition with very high standards in both competitors and the quality of the problems. I competed in the adult category, to get a chance to practise competing hard problems.

All the 3 rounds went well and in the overall I ended up third, which I am really happy with. I’m pleased with the result, as there were a lot of really good and strong climbers in the competition! I also felt really strong during the competitions and especially the last one.

It’s not too long to Christmas holiday now and I can really feel that in school as the workload is just increasing even more right now! So I have to stay up very late every night to be able to finish all the work, and I’m just exhausted for the moment!!

Posted by Oscar Krumlinde at 21:22 No comments:

Last weekend I travelled to Sweden to compete in The Swedish Bouldering Championship, to try to defend my two titles from the years before. The competition was held in a small city in the south part of Sweden called Västervik.

The qualification on Saturday evening went quite well and I was able to do 7 problems out of 8. The problems were of high quality and of different styles. I got second there and was ready for the final the next day.

In the final on Sunday morning after the being in the very small isolation for a long time, as the competition was more than 1,5 hour late, it was time to battle the first problem. I actually struggle with the first part of the problems, found it hard to get my long body in the right position, but was able to do it on my fourth try. The people that were top 3 from the qualification all struggled with this one, weirdly. The two problems after that were extremely easy and every one flashed them, so it wasn’t possible to take back the last point from the first problem!

Time for the last and very hard problem, I would get some good attempts on it but I wasn’t be able to top it. At least I got second highest on it!

Because of my poor result on the first problem in the final I ended up on fourth place in the competition, which was a bit of a disappointment. But there will be more competitions soon.

Congratulations to the all the winners!

Posted by Oscar Krumlinde at 10:22 No comments:

I wrote this a week ago but forgot to post it…

The trip to Sardinia was great, even if it was off-season and all the restaurants were closed…

The climbing the first few days weren’t too impressive and almost every route was on slab or vertical wall with tiny holds. I didn’t like it too much but it was good finger training! 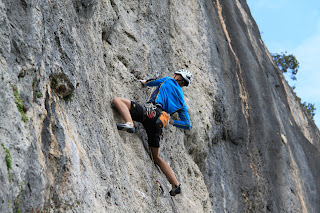 So the second half of the week we moved to another city, to climb at another area. Here the climbing was much better, step climbing mostly on pockets. The climbing started to go well too, was really getting into climbing after not being able to train that much lately because of school. I was able to do a really nice 8a and try many routes onsight just one after another. Some I did and many I was really close to do, but it was just so fun to try another route even if I was really tired! 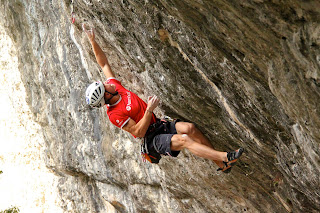 The surrounding area was always very beautiful and quit, which was a great bonus. We also had great weather, the whole week, with only a bit of rain during the nights. The big down side was the driving though, the roads very terrible going up the mountains, an 110km drive took more than 3hours!