Here are a few pictures that illustrate my last few weeks. Hopefully you are all enjoying the holidays! 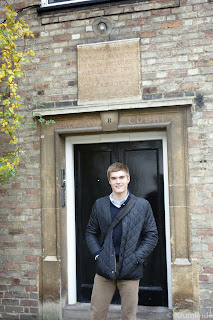 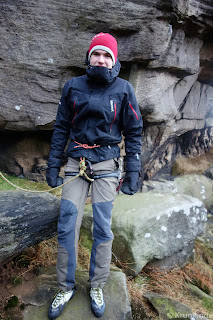 Different environments: paying respect to my hero, Mallory, while visiting Cambridge and a freezing cold day in the Peak District.

A picture in support of Climbing Against Cancer. If you don't know about the charity please have look at CAC's website.

A huge thanks to John Ellison for his fantastic work!

A short film from this summer!

Last weekend I took part in the Stockholm Climbing Festival. It was a really fun and warm weekend with a lot of great climbers. The highlight was definitely to watch Alexander Megos climb, really inspiring!

For a more detail description of the weekend and more fantastic pictures please check out: http://movefanatic.com/2013/09/09/a-great-weekend-at-the-stockholm-climbing-festival/


This last week has been extremely busy with long nights working on some very important assessments.


The past few weeks has been quite pact with climbing. Directly after finishing the antibiotics cure everything felt hard but it gradually got better.

Time for the Nordic Youth Championship in Helsinki, Finland. Qualification 1 went without difficulty. Qualification 2, I did not climb perfectly but it went ok. Ended up as fourth, ready for the final next day.

The warmup before the final felt great and I was ready to climb. I felt a bit nervous while tying in but as soon touched the starting holds it all went away. The first section went superb, climbed without hesitation and found a good rest around 25 moves up. Unfortunately just a few moves later a small miscalculation caused me to come off the wall way too early. Falling off feeling completely fresh might be the most frustrating thing in a competition but it happens and it is just to stay positive and look forward.

Luckily, other Swedes experienced a better day than me and overall Sweden was awarded quite a few medals. Weld done!

I will start my last year of school tomorrow, Monday!

Posted by Oscar Krumlinde at 15:56 No comments:

Unfortunately, I caught a bad and long lasting cold just before Chamonix, which never really wanted to go away. However, after finishing a 10 days antibiotics cure a few days ago it is, finally, time to catch up with some serious training again. Luckily I still have three weeks of holidays left; sometimes it is really good to be a student! 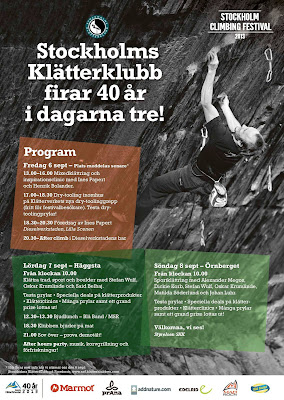 I also have a couple of fun plans for the next month. In the end of august, just before school starts, I will compete in the Nordic Championship in Finland. The weekend after I will take part in Stockholm Climbing Club’s 40-year anniversary. Granitbiten is the main sponsor of the event, so I will have the honour to help them out.

Posted by Oscar Krumlinde at 15:39 No comments:


Posted by Oscar Krumlinde at 11:36 No comments:

I have been dreaming to go alpine climbing in Chamonix for years. Last week I finally got my chance when I arrived in the small valley. I was also joined by some amazing people, which made this trip even better.

We had very warm weather with a lot of sunshine and no wind; something most people enjoy. I however am different, and prefer colder weather with some wind... At least the weather did not interfere with our plans.


During the week, our guide, Martin, introduced us to all kinds of techniques required to stay safe on the mountains. He took us to incredible places! Most of the time we were alone alpine climbing. We barely met other climbers. I know for sure I will come back!

As we returned down to the valley after three consecutive days on the mountain, we got the chance to meet up with climbers from the Swedish Team (and Danish).

My summer holiday finally started last Thursday.  Unfortunately, I cannot relax completely from school, as the list of books to read and essays to be written over the summer is still very long.  However, I will definitely not complain because I will still have more time to climb!

Last week I already got to spend three days in Peak District.  During the first two days, the English weather showed us what it is capable; it almost rained nonstop.  But no matter what type of weather is showing it self, it is always possible to find dry rock!

Our last day in Peak District was much better and I particularly liked the cold temperatures and the strong winds.  I got the chance to climb some classical trad routes on the famous Stanage Edge.  This was a true mental game! Being 15 meters up on the wall knowing that your last small cam is 6 meters below you, even when the climbing is easy, can be quite daunting.
Overall, it was great mental preparation for my alpine trip to Chamonix this Saturday.  I haven't been this excited for a trip in a long time; I cannot wait to be introduced to a new dimension of climbing.

This weekend I competed in the Swedish Junior Championships in lead climbing. On Saturday I arrived at the arena feeling excited to meet my friends again and to do my best in the competition. 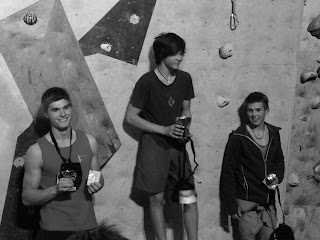 The qualification went well; I topped both routes, and I shared first place with Hannes Puman (who achieve an amazing 2nd place at the Youth World Championship last year). In the final I kept my nerves well together; I climbed well and efficiently up to a couple of moves below the top. Then a miscalculation caused me to fall off. Hannes won gold and I got the silver medal; a result I am extremely pleased with!

A big thanks to all those who made this competition possible!

Sunday involved a short and sunny visit to örnberget, my old home-crag in stockholm, with my friend Olle (who got the bronze), before it was time to head back home to london.
Posted by Oscar Krumlinde at 20:56 2 comments:

During the first three days it was just my dad and me but later our friends from Sweden joined us. It was a really fun trip with a lot of laughter, climbing and good weather for most of the time.

I returned home pleased, as it felt like my climbing had started to improve again. I did two 8a and two 7c+ and my body was able to handle multiple days of climbing. The rest of the group also climbed very well: Scott sending La Fabelita 8c, Olle doing his first 7c+ abroad and Peter showing extreme determination on his project that he most likely would have climbed if illness had not stopped him. Another highlight was to see Magnus Mitboe getting really close on his 9b project.

Hopefully it won’t be too long until I can return to the amazing rock walls that Spain has to offer!!
Posted by Oscar Krumlinde at 16:12 No comments:

Time back in London


Since my return from Spain I haven’t been able to train too much, I have been feeling tired and fighting with a slight cold. The main reason is probably that I haven’t got enough sleep from trying to keep up with both school and training. Another few days of taking it easy and I should be ready again :)

Looking forward to all climbing this spring!
Posted by Oscar Krumlinde at 21:52 No comments: